For one week in August I charted the way our team uses emoji in Slack.

Going in to the project, I had a handful of notions about what I might find: I figured we probably 👋 a few times a day, near the end and the beginning, especially on Monday and Friday. I thought there’d be a lot of 👍, which can be a quick way to approve small design changes. I wondered if we’d use 😄 more on Friday than on Monday. 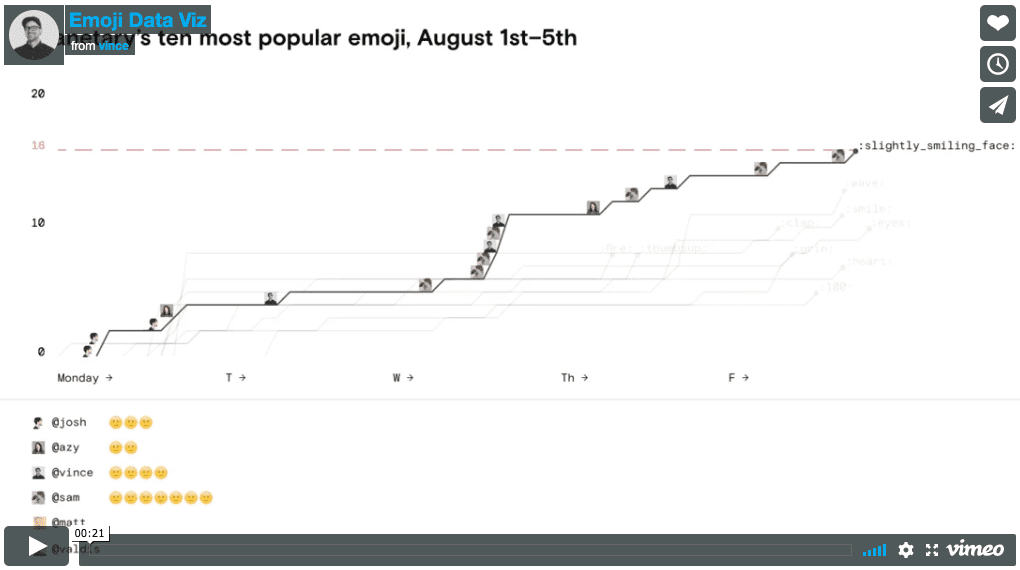 I certainly didn’t expect 🙂 to show up at № 1 — mostly because :slightly_smiling_face: is a long string to type, even when you’re trying to communicate a very specifically slight feeling of happiness — but it turns out that it’s the face that Slack generates when you type :).

The second big surprise was @josh running away with the № 3 most popular emoji by himself 😄.

As it always happens when the data starts coming in, the study of our behavior began to change our behavior. We began to become self-conscious about which emojis we used — had we used 👏 too many times? Was there a less-creepy smiling face? How come @valdis didn’t have any emojis in the top five? Did he only use too-cool-for-school hipster emojis? Shouldn’t we have more ❤️s?

In observing this, we’ve probably raised more questions than we’ve answered. For a full week we couldn’t help but think about how we used these tiny jaundiced faces (and hands) to communicate much more complex ideas.

And now we’re back to normal 🤓.